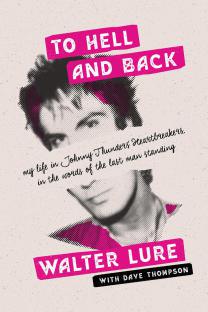 Walter Lure (with Dave Thompson) – To Hell And Back (Backbeat Books)

Unless you’ve been living in a plastic bubble for the last 40 or so years, the name Walter Lure should ring more than  a bell or two.  After all, he actually IS the “last man standing”, as the subtitle of this book suggests – from the infamous Heartbreakers – who may have had one single LP to their name… but that one LP has secured a place in the history – and hearts – of those who live and breathe the true essence of NYC rock and roll. So is this book anything to add to the already tired tales that have been spun over and over and over??? Well, let me tell ya….

Lure is quite the spinner of tales, with the true gift of holding your interest – which makes the book go by pretty quick…but that’s ok, because I’m sure you will read this book a few times at least!! Sure, he tells about his time with the Heartbreakers, the drugs, the debauched sexuality behind (and during) the scenes – but Walter’s straight up, no holes barred slant on the whole thing isn’t the typical jaundiced “by the numbers”  tawdry tales we’ve heard somewhere in the area of a gazillion times already. What makes it worth your time is the the way he paints the image of each character as they are introduced  – Billy Rath and Jerry Nolan in particular that will have you aghast AND laughing at the same time…and lets not forget Richard Hell, Nancy Spungeon, the guys in the Ramones – and his priceless description of Johnny Thunders introducing Walter to Ace Frehley. That’s worth the book’s price alone!!

So I’m sure most know that he eventually wound up working for Wall Street – and doing quite well I may add – but even more interesting was how in the early days of the Heartbreakers Walter worked for none other than the FDA. That part was quite the eye opener – and all I will say as a teaser? If you’re a fan of Fig Newtons…get ready for an education of sorts...

There’s a lot more personal things that Lure puts out there that’s not the usual fare, but its his brutal candor that makes it all the more endearing and you see a little more behind the curtain than you might expect. So, I’m not gonna venture further – you’re gonna have to grab a copy to discover the rest for yourself. What I WILL say?  Here’s the chance to get a story of a NYC survivor who can tell his tale with a flair that Oscar Wilde would love – and who actually " made it thru"  on his own terms. A refreshing read and HIGHLY RECOMMENDED!!! 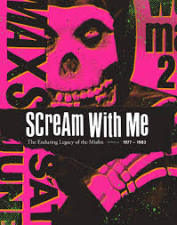 To be blunt and to the point, this is a gorgeous visual history of one of the more (somehow) influential bands who made believers and fans across many different genres of music - that just happened to emerge from the rather non descript Lodi, New Jersey. It cant be denied that on a visual level,  the Misfits were not to be topped -  they also were the only ones doing this kind of thing at that time, so that helped, too!! Flyers for gigs, album & 7 inch singles all with that unmistakeable artwork that to this day, sticks in your mind and probably burned itself into the back of your eyeballs...its all here, along with comments and such from high profile contemporaries and their own peers. Ive heard that the band has tried to get this book removed from shelves, which is typical of Glenn and Jerry - and a shame. So grab a copy while you still can!! If your local shop doesnt have it, or your just lazy - try here... 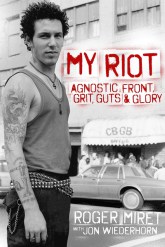 Throughout my 36 year history of involvement in New York hadcore I have tried to be as objective as possible with my reviews in GUILLOTINE, and the bands I have booked – most of the time it works, sometimes it is difficult, especially when it comes to the early years aka 1981-1984.  Although I did not grow up on the streets of the lower east side, I did move to Jackson Heights in 1979 and spent a good part of the early to late 80s hanging out on the LES.  As Roger so succinctly puts it in his book, it was our home – or “his party.”  Our music, our friends, our lives were and are entrenched in New York hardcore.  It was our coming of age “party” and where we first became accepted and took pride in being “different”, in being a social outcast, and learned to have self respect and self confidence.  It is what has bonded all of us from the “A7 generation.”

Roger’s book encapsulates his life from childhood to the present, with a good 2/3rds of the book dedicated to his connection with hardcore and the bands he played in, first with the Psychos andthen Agnostic Front.  The work that Roger and his collaborator Jon Wiederhorn put together is at times harsh, gritty and even painful. Roger discusses events that no one ever talked about, except in whispers; violence meted out as hardcore justice, conflicts that today would have the PC police up in arms all over social media – but it was a different time and a different world, and Roger tells it through his own experiences and he tells it well.  It is a good read and worth the “price of admission” into his private life and memories.  As Roger told me in an interview in March, he is a private person and this book was a window into a life he rarely shared outside his close friends and family – it is very cathartic, a release of demons long buried.

I read the book through the course of a few days. At times it is painful, especially his childhood years. I too had an abusive father and could relate to it on many levels.  I am proud of Roger for giving us the opportunity to really get to know him and to read this book.

However, and if you know me, there has to a however, you should take this tome as Roger’s memoirs of his life, and not as a history of New York hardcore.  It is his views and his life as it was experienced within the context of NYHC and its scene. If you want to read about NYHC as it was chronicled at the time it occurred seek out the zines like Damaged Goods, Guillotine, Big City, Bullshit Monthly…to name a few…

I will add that this book is one of my favorites written in recent years and I take my hat off to Roger…it took a lot of courage to put this one out!! BEST OF LUCK, ALWAYS..wje 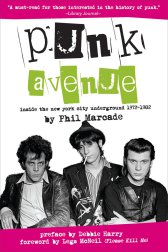 If you're sick and tired of having “Please Kill Me” shoved down your collective throats as the be all and end all of what NYC was like in the seedy days of the street level rock and roll universe – then here's another look with the same kinda grit, but a slightly different angle. What you get here is a view from a young Frenchman who had a taste for good music and a sense of adventure who wanted to live out his own version of a rock and roll dream – and he pretty much did – only to suffer some of the typical narcotic pratfalls along the way. Phillipe had a knack for falling in with all the cool people, and always seems to be in the right place at the right moment – AND also happened to be in one of the most unsung cooler bands that NYC ever had – the Senders. Told in a breezy, conversational tone – Punk Avenue goes by fast and keeps your attention the whole time.  A great alternative to the same old stories told by the same old names – I say its worth your cash – and the time to seek it out!! 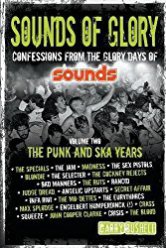 Sounds Of Glory – Confessions From The Glory Days Of Sounds Vol. 1 & 2– Garry Bushell

Divided into 2 volumes, ‘Confessions’ is – for the most part – Garry Bushell recapping or cherry picking thru his written Sounds Newspaper output – just to probably remind us all that HE WAS THERE…! Garry, along with Nick Kent , was one of those full of themselves type of journo writers whose self worth is only rivaled by their total narcissism…Well, if you want to relive history as its already been written, here's a neatly packaged retrospective for you.

STOP BY OUR SHOW REVIEW SECTION FOR THE BOWERY ELECTRIC "RAMPAGE" REVIEW - AMONG OTHER THINGS...

THE PHOTO SECTION FINALLY IS DUE SOON!!!