YES!!! Its here, wether you like it or not. Our MOVIE SECTION is gonna feature stuff that springs up here and there...not all of it is going to be NYHC/Punk/Music based, mind you...if we found it interesting? It'll be here. 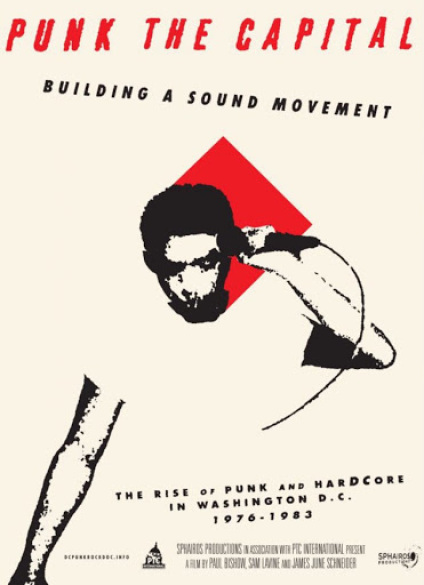 On one of the very coldest nights of 2020 we drove to Philadelphia to watch the premier of Punk The Capital, a much-publicized documentary of the DC hardcore scene (or so we thought).  Expecting a large crowd, since the screening at the Nighthawk in Brooklyn scheduled for 3/11 was sold out, we arrived early.  The cavernous building that housed the Lightbox Film Center, was practically deserted when we arrived a half hour early to be assured of good seating.  Seriously, it was like a ghost town!  When we got out of the elevator on the 3rd floor the only person in the auditorium was the projectionist, who asked us to wait in the hallway.  So, we sat on the stairs until a few people started to trickle up the staircase, looking as bewildered as we felt in the empty corridors.  The theater itself was really more like a large high school auditorium with harddwood floors, no carpeting, curtain, etc. – no frills, just like early DC hardcore, so in that respect they couldn’t have chosen a more appropriate location, punk clubs like the Voltage Lounge or Underground Arts withstanding.

By the time the film started the seats were about 3/4s full, with some viewers already popping open their staple cans of beer.  They were certainly going to need it.  Five hours of footage was paired down to one hour and 30 minutes, leaving the meat of the movie on the cutting floor.  What was left focused primarily on the pre-hardcore punk era in DC and the seminal club Madams Organ, where artsy punks and new wavers rubbed shoulders with aging hippies and shared drugs, art and music.  The featured band of that era, and the main focus of the film, was the Slickee Boys, a band whose music would have been more easily associated with bands like Television or Patti Smith rather than a Heartbreakers or Ramones.  When the focus pushed ahead to bring on the hc punks it limited itself to The Bad Brains, Henry Rollins and SOA, and Minor Threat: all important bands that certainly made their mark not only on DC hardcore but the music worldwide as well.  However, all of these bands and their star musicians have already been the focus of music documentaries and publications, and the other bands that were equally important received minimal if any billing.  As a person who was part of the NY hardcore scene since 1981, who had the privilege of seeing Black Market Baby, Void, Iron Cross, Government Issue, Faith and so many others, when they played clubs like CBs, A7 and Great Gildersleeves, the filmmakers who made the decision to give the briefest of nods to so much talent provided the viewer with a skewed and inaccurate depiction of the healthy bunch of artists that made that scene so vital..and in doing so not only insulted them collectively but dismissed their importance.  The other slap to the face that this movie gave the collective DC scene was to include Joey Kiethley of DOA  (no insult intended to this great guy) and Jello Biafra as narrators to this film, neither of whom were residents of that city.  When I asked this question after the screening, the filmmakers gave a vague and inaccurate answer, claiming they were both eloquent speakers.  SERIOUSLY, FOLKS!!  The guest speakers were HR (Bad Brains) and Howard Wuelfing (Slickee Boys), but the majority of the questions were answered by the filmmakers.  I understand on March 11th members of Minor Threat and Faith will be in the panel and hopefully some of the questions and oversights will be answered to explain why a film sub titled “building a sound movement” left out so much of the foundation, not to mention the brick and mortar. -- wje 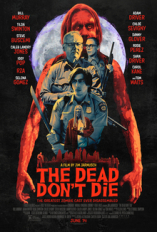 OK, I have nothing against Jim Jaramush. Matter of fact? His documentary on the Stooges was downright brilliant! But THIS…..can we say woulda, shoulda, coulda??

We’ve got a movie with a cast that would’ve been capable of a whole lot more – but they’re trapped in a cinematic shoebox of what appears to be intended bad jokes, a storyline more lifeless than the zombies in the movie…and add in scenes that have no correlation with one another, and the ending where Tom Waits prattles on about tying in zombies, consumerism and how fucked up humanity is while the main 2 characters are getting devoured….

Well, at least the drinks served @ the Alamo were good for the price!!

STIV : NO COMPROMISE, NO REGRETS

He was a Dead Boy. A Lord of the New Church. Solo Artist. Though he wore many hats, everything he did was purely Stiv. His name always is one you will acknowledge instantly, because of how he has imprinted himself into the worlds punk consciousness and culture. But I’m sure there’s still some parts of the world that ask – who the flying fuck is Stiv Bators, and why should I give a fuck??? Glad you asked, buddy boy….

Well, dear reader…Steven Bators Jr , straight outta Ohio – even as a young boy was clearly “not just anyone”, as he would later snarl in “Sonic Reducer”…a song that left more than a sizable footprint on the idiom referred to as American Punk. Here was a young boy who clearly wasn’t content to be in the background, and needed to place himself front and center – maybe there was more to his exhibitionist tendencies than we knew, Hahahaha…..

Mr Garcia fleshes out the flick with Stiv’s early forays into his musical journey, which is worth the price of the ticket alone – then the Dead Boys & Lords getting a little less of a shake than you’d guess – maybe because that stuff is more documented? Either way, more footage and coverage about his early years and post Dead Boys/pre Lords woulda been nice – but “STIV” is a well rounded, solid doc that fares better (in my opinion) than his last flick “Looking for Johnny”, which kinda left the viewer a bit cold and with many questions. Either way? “STIV” is more than worthy of your attention, people. And yes, you absolutely need this DVD in your collection – now!!

“This film is based on truth, lies, and what really happened “. Now THAT should be a clue right there as to how this little saga unfolds. Based somewhat on the book of the same name,  director (and one time Bathory drummer ) Jonas Ackurlund attempts to put forward a semi- suitable version of a rather twisted tale that is hard to work with – hence the Hollywood spin on a topic and time period that many might see as….unsavory? Yeah, that works, Hahahaha…..

One noteworthy thing here is that the whole Norwegian Black Metal scene was insular, cliquish and so far up its own ass that unless you were there at that time? The truth will forever avoid you. Another thing you should consider – the people involved here weren’t exactly adults…and chose to conduct themselves in “extreme” manners. And as you might expect, things didn’t quite work out as they expected…particularly when murder is involved!! Church burnings?? Ahh…that’s a whole other issue…

So if your looking for a story about some young ambitious guy who’s band kickstarted a revered and somewhat hated extreme genre of music – who gets too caught up in the actions unfolding around him to pull back – and who’s story doesn’t have a good ending…than here’s a movie worth a view or 2. But, that’s as far as it gets. Poser…….

STOP BY OUR SHOW REVIEW SECTION FOR THE BOWERY ELECTRIC "RAMPAGE" REVIEW - AMONG OTHER THINGS...

THE PHOTO SECTION FINALLY IS DUE SOON!!!