Hey, it's Don here - welcome to WHATS NEW.  Whenever we have a new feature that you will hear about on Facebook or wherever else? There will be a link HERE ( yes, here on this page) that will take you to the spot in question (hence the whole "what's new ' angle...get it?? Hot damn...I'm soooo clever... I should be getting  PAID FOR THIS!!!) Ok, totally serious now...a lot of people were griping about "no direct links", yadda yadda yadda...so Im actually attempting to please our public - and fellow writers and such...So time permitting , I shall be adding as I go along. We have a web work staff of ONE - and yer talkin to him. So I shall see you here periodically - and look forward to your visits!!!  - DB

Well, hello!! The holiday's are ramping up with gusto - and with Thanksgiving in the rear view, hers comes Santa. BUT, before the old guy cruises into view, we've had some interesting times as of late...the LUNACHICKS hit the old Ritz - I mean Webster Hall for 2 nights in a row, bringing that high energy, high volume hijinx that brought the nostalgia of the older NYC up close and in yo face - and if ya know, then ya know. We also had DR KNOW (the band, not Gary Miller!!) sneak thru NYC at the Warsaw in Greenpoint, Bklyn - pretty much unannounced.WTF is up with that? Ya gotta put the word out there, fellas - the internet get the word out faster than the days of (212) OPEC SID could.....but you KNOW THAT, right??

ANTIDOTE (Louie and Nunz version) hitting the road for a little outside of NYC action, stay safe on the road, fellas...ok, not sure of this next bit is 100% correct - but it seems MADBALL will be joining GWAR for some select shows, one of them being December 14th at NY's Irving Plaza along with Napalm Death and Eyehategod. This should definitely prove interesting,to say the least....

The ALLIGATORS (Roger Miret's other band) has isseud a new (second pressing,actually) 12 inch that you can get thru the website NYHCdesigns.com  on green splatter vinyl. Don't sleep on this one - it'll be gone soon enough - and these guys DONT disappoint!!! Okay, th's it for the moment - back with more soon as it hits my desk @the annex....peace!!! 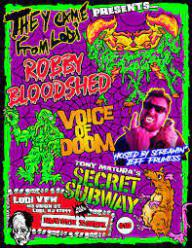 ...so this gig that happened a few days ago out in a VFW hall in New Jersey - has a verrrrrrry interesting story behind it. What we discovered? Love for the MISFITS sure runs deep !!! And that young promoters feel that they can abuse a woman - in more ways than one. Check out our Show Reviews section for the FULL STORY!!! 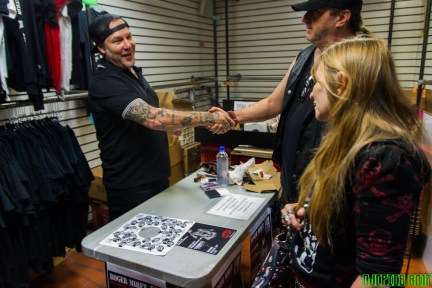 I had my reservations about attending what I assumed would be a three ring circus as most of these events usually are – and expressed this to Roger a few days beforehand – but as I know and love the guy, I decided to brave the insanity and head over to Generation after work on that Monday evening.  Thankfully, the temperature was not as hot as it usually is in the tail end of August, and it wasn’t too unbearable in the bowels of Generation, where the book signing was taking place.  Although I arrived a little after 6:30, there was already a line of people in front of the table where Roger sat, signing copies and stamping them, with one or more of the stamps he had made especially for this occasion.  There were many faces I recognized from the scene, both old and new.  In fact, there were a lot of “grey hairs” in the crowd, who hadn’t probably been down in these parts in a very long time, but were here to be part of their “hardcore reunion.”  This conception was driven home when Sandy Sect brought her 1983 high school yearbook, which had been signed by many of the people present this evening, and who had signed it 34 years ago, and were asked to sign it again in the present day.

The basement of Generation became too crowded, especially as none of the stacks had been moved, and people had to stand in the aisles between records, while Roger signed on one end of the room.  At one point, Roger went to the other side of the stacks, where Stigma was set up to play, and did a Q&A and reading from his book.  It was difficult to hear Roger, even with a microphone for some reason – but you could certainly hear Drew Stone, the moderator clearly enough.  I eventually went upstairs, after getting frustrated from straining to make out what Roger was saying.  After Q&A, Stigma played..  Vinnie, the other half of the dynamic duo of AF, was hamming it up as only he can, in even such a cramped spot.  At some point Roger got up to join him, making for a memorable moment to end the evening.

NEW MUSIC AND SHOW REVIEWS, TOO!!!